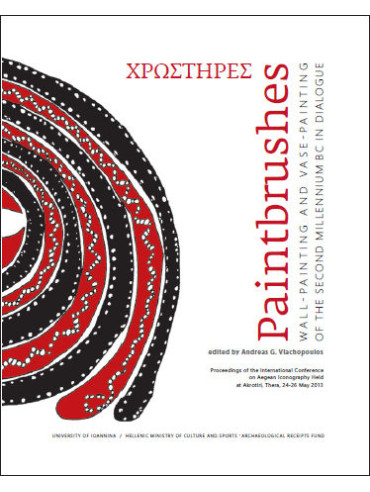 "ΧΡΩΣΤΗΡΕΣ / PAINTBRUSHES. Wall-painting and vase-painting of the second millennium BC in dialogue" was an interdisciplinary symposium addressed to archaeologists, conservators of antiquities and artists specialized in the study of Aegean iconography. All were invited to Akrotiri, Thera, from 24 to 26 May 2013, to participate in open discussions on the dialectical relationship that developed between the arts of vase-painting and wall-painting in the Aegean during the second millennium BC.
The meeting was organized in collaboration with the Study Centre for Prehistoric Thera, of the Archaeological Society at Athens, and the University of loannina. It took place in the amphitheatre of the Akrotiri Excavations, giving participants the opportunity to see at first hand important works of Aegean art, the recent discovery of which has given new content to (and in many respects the reason for) the subject of the meeting.
The members of the Scientific Committee of the ΧΡΩΣΤΗΡΕΣ / PAINTBRUSHES conference, which was scheduled as a three-day workshop at Akrotiri, were Dr Christos Boulotis (Academy of Athens), Professor Emeritus Christos Doumas (University of Athens), Professor Nanno Marinatos (University of Illinois at Chicago), and Associate Professor Andreas Vlachopoulos (University of loannina). [...] (From the publisher)